The last talk of the 2019-20 session is also coincidentally the most topical in the light of the worldwide threat from the recently identified coronavirus. James Kennedy, a former nurse, is a Scottish authority on the 1918-20 'Spanish' flu pandemic; he has written and lectured extensively on this subject and the Society is fortunate to have him as guest speaker at its March meeting.

Evening meetings of the Society are at 7.30 pm in the Park Centre, 45 Kerr Street, Kirkintilloch, G66 1LF. The annual membership subscription is £10; visitors are welcome at all of the Society's evening events but a donation of £3 is requested.
Posted by Ivan Ruddock at Thursday, February 27, 2020

At the 2019 AGM, the membership of the Society approved a proposal by the committee to make a donation to a deserving local charity. Contact Point was the preferred choice on account of its work among the special needs adults of the community.

The presentation was made at the beginning of Members' Night on Thursday 20th February 2020 to Mrs Christine Davis who represented the charity. In receiving the donation, Mrs Davis thanked the Society and described the work of Contact Point and how the donation would help in the running of the Coffee Clubs.

The Society's annual Members' Night was held on Thursday 20th February with 'A Favourite or Interesting or Significant Book' as its theme. Eight members participated with each speaking for eight to ten minutes on their choice of book and they made the evening an enjoyable event, as is always the case with Members' Night.

The eight books fell into the following broad categories - two on the Scottish landscape and outdoor activities, one on the history of a nearby locality, three novels, one a collection of pieces of journalism and one a Bible commentary.

'Mountain, Moor and Loch' is a profusely illustrated 1895 guide to the route of the recently opened  West Highland Railway while 'Hamish's Mountain Walk' is the inspiring account of Hamish Brown's successful attempt in the summer of 1974 to climb all of the Munros in a single continuous expedition. 'The Parish of Campsie' is an account of all aspects of the Campsie area by local historian John Cameron and published in Kirkintilloch in 1892.

The three novels were chosen for different reasons - 'The Little Coffee Shop of Kabul' by Deborah Rodriguez because of its description of the challenges faced by women in Afghanistan; 'The Notting Hill Mystery' by Charles Warren Adams because it might be the first detective novel and that its true authorship is a mystery; 'The Affair at Invergarroch' by Michael Elder because not only is it a good read as a children's book, but also that the author himself was only seventeen years of age when he wrote it.

Dannie Abse's 'Journals from the Ant-Heap' is a collection of amusing anecdotes from when he wrote for national newspapers as well as being a physician and acclaimed poet. The most physically impressive choice at Members' Night was a three volume nineteenth century Biblical Commentary, i.e. a cross-referenced Bible. What made this particularly interesting was that the set had been presented in 1877 to Mr and Mrs Thomas Coats of the Paisley mill owning family by the minister of Sannox church on Arran; this previously redundant church is currently being developed as a Christian centre by a group including the member whose choice this was. 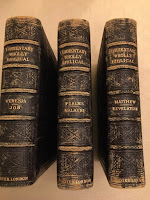 The theme of this year's Members' Night is "A Favourite or Significant Book", interpreted in whichever way the participants wish. In other words, the book concerned could one that has been enjoyed and could be recommended or is of great literary importance or is even one that has been disliked. The format of the evening will be as in previous years - each contributor has the opportunity of speaking on his or her topic for about five minutes with or without illustrations.

If you are thinking of contributing, please let Ivan Ruddock know of your intention, and if you wish to have some images included in the composite PowerPoint presentation, please send them using the Society's email address that can be found under "Contact Us".

Evening meetings of the Society are at 7.30 pm in the Park Centre, 45 Kerr Street, Kirkintilloch, G66 1LF. The annual membership subscription is £10; visitors are welcome at all of the Society's evening events but a donation of £3 is requested.
Posted by Ivan Ruddock at Tuesday, February 11, 2020