The third meeting in the 2021-22 season of the Antiquaries is a talk by Les Jenkins entitled 'Scotland's Suffragettes' on Thursday 2nd December. Les, a retired history teacher, is a long standing member of the Society who has contributed regularly to Member's Night and written articles for Scottish Local History.
Due to the decision of the Society's committee to postpone holding conventional meetings until January 2022 at the earliest, the talk will be in the form of a live Zoom meeting at 7.30 pm. The link to join will be sent to members by the previous day, Wednesday 1st December 2021.

A video of Dr Frances Dryburgh's talk, 'Finding the Ladies - Women Donors to Kelvingrove Art Gallery and Museum', delivered by her on Thursday 4th November, is now available for viewing on the Society's YouTube channel.
The video can be viewed directly by clicking on the above image of Kelingrove Art Gallery and Museum, or by going to the Society's YouTube channel which can be accessed by clicking here.
Posted by Ivan Ruddock at Wednesday, November 10, 2021

The second meeting in the 2021-22 season of the Antiquaries is a talk by Dr Frances Dryburgh entitled 'Finding the Ladies - Women Donors to Kelvingrove Art Gallery and Museum'. Due to the decision of the Society's committee to postpone holding conventional meetings until January 2022, it will be in the form of a live Zoom meeting at 7.30 pm. The link to join will be sent to members by the previous day, Wednesday 3rd November 2021.

Dr Dryburgh is a retired consultant biochemist who was head of the Biochemistry Department at Glasgow Royal Infirmary. For twenty years she attended various History of Art classes at Glasgow University and this led to guiding at Kelvingrove, foreign study tours and membership of Friends of Glasgow Museums. More recently, as a 'Friend', she has been researching the donors of paintings in the Glasgow Museums' collections, and this project forms the basis of her talk to the Society.
Posted by Ivan Ruddock at Tuesday, October 26, 2021

A video of Dr Nina Baker's talk, 'Daughters of Vulcan - Women and the Glasgow Hammermen', delivered by her on Thursday 7th October, is now available for viewing on the Society's YouTube channel. 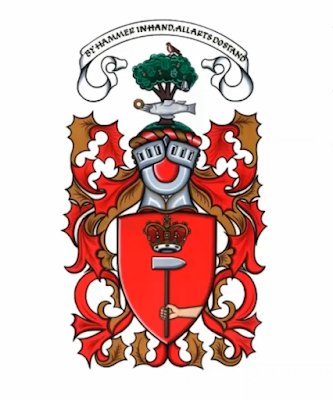 The video can be viewed directly by clicking on the above image from Nina's presentation, or by going to the Society's YouTube channel which can be accessed by clicking here.

The first meeting in the 2021-22 session of the Antiquaries is a talk by Dr Nina Baker entitled 'Daughters of Vulcan - Women and the Glasgow Hammermen' in Engineering'. Due to the decision of the Society's committee to postpone holding conventional meetings until January 2022, it will be in the form of a Zoom meeting. The link to join it will be sent to members by the previous day, Wednesday 6th October 2021.
In her new talk, Nina poses the question: 'What is the connection between the famous Saracen’s Head pub in Glasgow’s east end and the city’s first ‘hammerwoman'? The Incorporation of Hammermen of Glasgow has, for the vast majority of its very long history as one of the 14 Trades of Glasgow, been an organisation of men who wielded hammers. But things change and history moves on. Her talk will introduce the history of the Incorporation of Hammermen to those unfamiliar with this Scottish equivalent of the English Guilds and Livery Companies. She will then reveal her research which led to the discovery of the extraordinary life of the woman believed to have been the earliest woman involved with the Incorporation as well as more recent women members of the Craft in Glasgow.
Dr Baker has had a varied career - she became a merchant navy deck officer on leaving school and then, in her 30s, obtained an engineering design degree from the University of Warwick and later a PhD in concrete durability from the University of Liverpool. She has lived with her family in Glasgow since 1989, working variously as a materials lecturer in further education and as a research administrator and, until 2017, as an elected city councillor. Now retired, Nina's interest in promoting STEM (Science, Technology, Engineering and Mathematics) careers for girls has led her to become an independent researcher, mainly specialising in the history of women in engineering.
In January 2021, Nina spoke on 'Scotswomen Working in Engineering', and this presentation is still available for viewing on the Society's YouTube channel which can be found here.
Posted by Ivan Ruddock at Wednesday, September 29, 2021

Annual General Meeting, 9th September 2021, and the end of an era

The much delayed 2020 Annual General Meeting was held, along with the slightly less delayed 2021 Annual General Meeting, on Thursday 9th September 2021 by Zoom. The agenda for the meeting was similar to that of previous AGMs with the main items being the President's report, the presentation of the audited accounts, and the election of office bearers and committee members.
Since a new committee was elected in 2016 following the adoption of the new constitution, many of its members had either come to the end of their periods of office or had decided to retire. In the latter category were Mrs Rita Bennie (Treasurer 2017-21) and Mr Les Jenkins (Press Officer 2016-19). Rita took over as Treasurer from the President, who was the acting Treasurer for a year following the sudden death of David Brown in 2016, and kept very accurate records of the many varied monies arising from subscriptions, visitor donations and outing tickets - frequently all having to be collected at the same time. Les revived the role of Press Officer by having advance notices and reports on meetings of the Society published in the Kirkintilloch Herald. With the meetings being normally held on Thursday evenings, he had to draft his report that evening or first thing next morning to meet the newspaper’s deadline for its next issue.
The AGM also marked the retirement as Secretary of Mr Don Martin, after an unprecedented forty-ones years in the post, following a spell as Vice-President during 1978-80 and before that as a committee member. While Secretary, Don took responsibility for assembling the programme of meetings in which he usually participated each year – sometimes accompanying himself on guitar – and kept the Society informed of issues and projects that it should be aware of or involved in. In addition to the normal duties of Secretary, he organised the Society’s participation in East Dunbartonshire’s Local History Week and Doors Open events, frequently leading walks, including around Kirkintilloch, Waterside or the Auld Aisle Cemetery. Don has also written histories of Kirkintilloch and Lenzie, the Forth & Clyde canal, and the development and decline of the local railway network. However, his retirement does not end his involvement with the Antiquaries as he has been created an Honorary Member of the Society, and as such will still be an active member of the committee.
All three retiring committee members were warmly thanked by the President for their contributions over the years, as were the other members of the committee, and the general membership who helped with the running of the Society.
Dr Ivan Ruddock was re-elected President but he indicated that he did not wish to serve a full four year term and that it would be for one year only in the first instance. Dr David Graham was re-elected Vice-President, Dr Murray Reid was elected as the new Secretary and Mrs Caroline Brooks was elected to one of the vacancies on the committee. Those committee members – Mrs Elizabeth Corroon, Mrs Ianthe McAlpine and Mrs Valerie McClure - who were willing to stand again for the committee were confirmed as members although Elizabeth and Ianthe only intend to serve for one year each.
Posted by Ivan Ruddock at Sunday, September 19, 2021