Launch of "Thomas Muir of Huntershill: Essays for the Twenty First Century"

A new addition to the field of Thomas Muir was marked with the publication of "Thomas Muir of Huntershill: Essays for the Twenty First Century". The collection is edited by Prof. Gerard Carruthers of the University of Glasgow and Don Martin, Secretary of Kirkintilloch and District Society of Antiquaries and contains fifteen essays by a range of authors including the editors, Sir Tom Devine of the University of Edinburgh and Alex Salmond. The  launch on Thursday 15th December 2016 at the Kelvin Hall featured contributions from the editors, and Sir Tom Devine who gave his personal view of the position and role of Thomas Muir in the development of radical thought in the British Isles.

Further information on the book can be obtained at the Thomas Muir website by following this link.﻿
Posted by Ivan Ruddock at Tuesday, December 27, 2016

On Friday, 25th November 2016, five of the Antiquarians attended what they thought was a seminar to discuss the Cowgate Gateway Markers Project proposed for Kirkintilloch. Faced with a workshop to demonstrate how to design in clay, although rather diffident at first, Les Jenkins, Shirley Cowan, Ros McMeekin, Liz Corroon and David Graham together with representatives from other groups rolled up their sleeves and got 'stuck in'. With assistance from the tutor, Marion Smith - a sculptor from Largo who has been commissioned to design the Gateway Markers, we spent an interesting couple of hours working with clay, seaside shells and fabrics to design and cast plaques in plaster of Paris.
While waiting for our work to dry and enjoying a much needed cuppa, Marion asked us for knowledge of the history of Kirkintilloch and what we considered might make suitable markers for the Gateway Project. Ideas ranged from the Roman era to Tom Johnston. Marion noted these suggestions and indicated that she would be interested in others before the end of 2016 and can be contacted via m.smithsculptor@greenbee.net. Marion showed the group examples of previous commissions in stone, metal and wood which can be found in towns throughout Scotland including Keith and Anstruther.
Further information on the Cowgate Gateway Markers can be obtained from Iain Brodie (07990-775116, iain.brodie@eastdunbarton.go.uk) 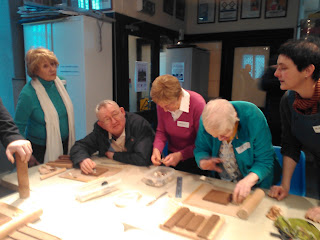 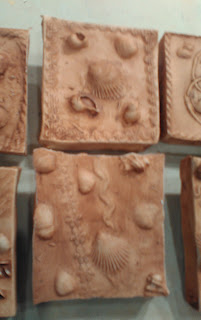 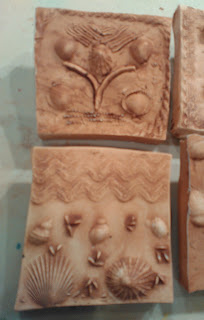