The January 2021 edition of the Society's newsletter has recently been created and edited by committee member Valerie McClure. It includes the immediate plans of the Antiquaries, a review of last year and items of general interest for members. It can be viewed or downloaded by clicking on the image of the first page below. 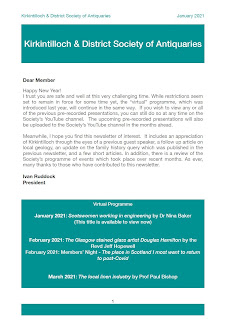 The newsletter has already been circulated to those members of the Society who provided their email addresses following the introduction of the General Data Protection Regulation 2018. The list of active email addresses will be updated using the information supplied on the membership renewal slips for the 2021-22 session.
Posted by Ivan Ruddock at Tuesday, January 26, 2021

The fourth of the 'virtual' meetings in the 2020-21 session of the Antiquaries is a talk by Dr Nina Baker entitled 'Scotswomen Working in Engineering'. In this presentation, she shares some of the terrific stories about amazing women, from her years of research into these hidden histories, focussing on women who were engineering graduates of the Scottish universities or who worked in Scotland.

Nina has had a varied career - she became a merchant navy deck officer on leaving school and then, in her 30s, obtained an engineering design degree from the University of Warwick and later a PhD in concrete durability from the University of Liverpool. She has lived with her family in Glasgow since 1989, working variously as a materials lecturer in further education and as a research administrator and, until 2017, as an elected city councillor. Now retired, her interest in promoting STEM careers for girls has led her to become an independent researcher, mainly specialising in the history of women in engineering. It is hoped that she will be able to give a full talk on this subject matter whenever the Society reverts to conventional meetings. 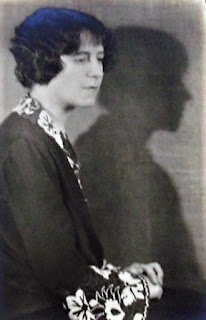 The presentation lasts for less than half an hour and can be viewed directly by clicking on the above image of Dorothee Pullinger, the automobile engineer, or by going to the Society's YouTube channel which can be accessed by clicking here.
Posted by Ivan Ruddock at Tuesday, January 12, 2021